Our festival has thundered again and emotions are overflowing all of us!

Moscow Samba Festival has culminated with spectacular carnaval parade and a big concert of Brazilian music. It has become a flashy opening of summer season.

We wish this load of emotions, joy and inspiration to be enough for everyone for the whole year! And next year we will certainly meet again! 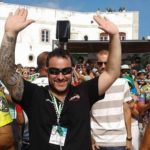 Mestre Caju is from São Paulo. In his youth he used to play in a “bloco” in his district and then at the school «Mocidade Alegre». In 1995, he became one of the founders of the «Mancha Verde» bloco and, later, of the samba school «Mancha Verde», which took the 3rd place at the carnival in São Paulo this year. For more than 10 years Eduardo has been leading the “bateria” of this school, which, in fact, is his brainchild and is considered the best bateria in São Paulo.
Read more…

The program can change! Stay tuned for updates!

Partner hotels provide discounts for the guests of the Fesatival