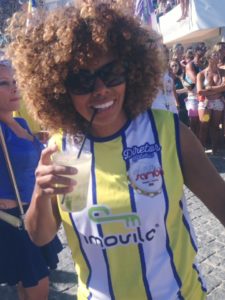 Lili Nacimento was born in São Paulo. She is a grand-daugher of José Maria do Nascimento, one of the founders of São Paulo samba school Mocidade Alegre. Lili hasn’t had a chance to know him, but she has inherited his love to samba. She started to take part in samba parades yet in her mother’s womb. Then she danced in children’s wing of parades, and later she joined wing of compositors and strings crew.

From the childhood she loved percussion, following her father, who was the first repenique and then mestre of bateria. As she has seen cavaquinho in the house of her grandmother at her 12, her attention has switched to that instrument. She tried to use any chance to ask someone to teach her some solo or a chord.

At 14, her father bought her the first cavaquinho. At 15 she started to learn cavaco, popular and classic percussion in Universidade Livre de Música Tom Jobim. At the same time she played in her samba school.

In the 1998 she has played on a stage of the Mocidade at the election of a samba song. Her uncles composed 2 songs, and asked her to play them. In the next years the other compositors asked her to play their songs. As Lili always was at quadra (samba school main rehearsal location), she often played at rehearsals and shows when the official cavaquinho was absent.

At 2002 she took part in the official parade as a cavaquinho player for the first time. On this role Lili was met with a degree of scepticism, because it was generally considered that playing cavaco is not a woman’s job. This attitude only encouraged Lili to master her skills. Soon, she has become the official cavaquinho of Mocidade Alegre. With Lili on that role the school has won Carnival 2004 competition for the first time in 24 years. This was one of the most impressive moments in her samba life.

In 2012 Lili went to Europe, where she felt proud when she has realised that there are people who pay so much attention to Brazilian culture in spite of the distance. Playing samba is very difficult even for Brazilians, but in Europe Lili has met many people and bands who have impressed her with their level.

At the moment Lili is a professional musician and a teacher. She teaches cavaco and percussion, plays with different musicians, and spreads Brazilian culture in Europe.