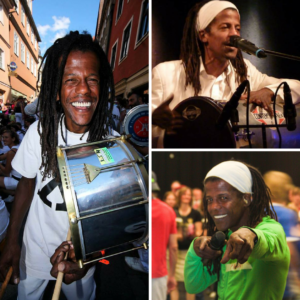 Valdir Vieira dos Santos is a singer, percussionist and composer from Olinda (Pernambuco, Brazil). From the early childhood he has showed his love for music.Being 14 years he joined bands Coco Amaro Branco, Aurinha do Coco and Grupo Rala Coco.

In 1997 Valdir obtained professional status as a performer by the «Ordem dos Músicos do Brasil» (Recife). Also he sang and played in the samba schools Preto Velho and Escola de Samba Oriente (1st place at the Carnival). In 1998 he appeared with Alceu Valenca at the Carnival in Recife and Olinda and the CD recording «Forró de todos os tempos».

He also played a concert with Simone Guimarães in Rio de Janeiro.

In 1998 he began a two-year collaboration with Naná Vasconselos in the group «Invocação á Pernambuco» with various percussionists and musicians in Salvador, Paulo Alfonso, Recife (Pernambuco).

In 2000 he moved to Berlin. He played with the «Bateria Furiosa» and also played as a guest musician in the concerts of Neguinho da Beija Flor and Luiz Meoldia.

From 2001 to 2004 he worked as a percussion teacher in percussion center groove in Berlin. The same year, a long-standing collaboration with the bateria «Sapucaiu no samba» has began. In the bateria he takes part as a singer and composer of various samba enredo songs and brings success to the group, so that the bateria consecutively wins the Carnival of Cultures in Berlin for five years.

In Germany he conducted numerous workshops for children and adults, such as 2001 in Country Music Academy in Berlin, 2003 at the European Schools, on the Samba Syndrome, 2010 in Bad Wildungen with the «Bateria Sempre Samba», etc.

In 2006 he played percussion and back vocal in the band of Anastacia Azvedo and Eugenio Rodrigues and participated in the recording of the CD «Amanayara».

Being a versatile artist Valdir also does painting and woodcarving. In 2004 he displayed his works in the PAC (Peru Sion Art Center) under the name «Olinda Art».

In 2002 he founded the forró band «Mistura Fina», and the samba band «Ilustrasamba». Since 2005 he is also the organizer of the most famous traditional Carnival Party «Baile a fantasia» Berlin with a frevo orchestras and samba music.

In 2012 the foundation of «Bateria de Samba Verde e Branco» was not only the realization of a project, but a dream come true.

Since May 2013 he plays in the project «Transaxéelectroacoustique», in which the Afro-Brazilian drum rhythms to mix with the electronic compositions of Jan St. Werner. The group gives the performances in different cities of Germany; the presentation of the CD took place in Paris in October 2013.

In the same year he also founded the «Olinda Trio» consisting of piano (Camile Phelep), flute (Hortense Rigot) and percussion and vocals there. The repertoire consists of popular Brazilian music, Chorinho, samba, bossa nova and forró.

For thirteen years versatile artist Valdir Vieira Dos Santos lives in Berlin and charmes the music loving audience with his talent. He is always welcome everywhere and appreciated by his affinity for music and his musical charm. It also offers samba shows and percussion lessons and is also a musician of many other projects in Germany and Europe.